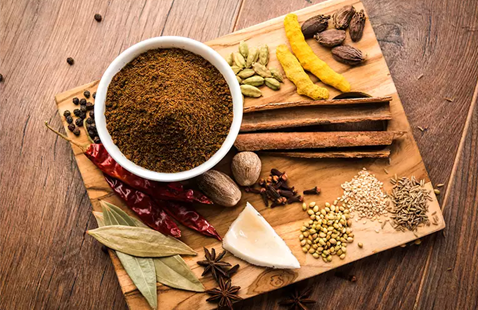 Garam masala from garam ("hot") and masala (a mixture of spices) is a blend of ground spices, originating from the Indian subcontinent, common in cuisines from the Indian subcontinent, Mauritius and South Africa. It is used alone or with other seasonings. The word garam refers to "heating the body" in the Ayurvedic sense of the word, as these spices are believed to elevate body temperature in Ayurvedic medicine. Garam masala oleoresin is a perfect combination of spices oleoresins like Bayleaf, Black pepper, Cardamom, Cinnamon, Clove, Cumin, Coriander, Capsicum, Nutmeg, Ginger etc to add not only flavour but the aroma that's required in a perfect Garam Masala. The oleoresin obtained by extracting dried seed, leaf of many spices through the process of Super Critical Fluid Extraction green technology method and blend by our specialized R&D team. Oleoresin of garam masala is reddish-brown liquid with spicy aroma consists of various components namely Isoeugenol, Piperine, Terpenyl acetate, Cinnamaldehyde, Eugenol, Cuminaldehyde, Linalool, Capsaicin, Sabinene, Gingerol. It’s blend of spice oleoresins used specifically for Garam Masala, the Garam Masala oleoresin adds not only flavour and aroma that’s required in perfect cuisine.

Ozone Naturals are blessed with a green extraction, production method that is SCFE, large storage facility that helps us in keeping large stock and meeting urgent and massive requirements of the customers. With us, clients can stay assured for the quality of the products as we make use of the first class raw material that is, tested by well equipped quality control laboratory with experienced & knowable analyst on several measures prior to product manufacturing. Ozone Naturals offer world class quality Garam Masala Oleoresin as per customer demand.

1) Used as a flavouring agent in different types of cuisine.

Garam Masala Oleoresin is a powerful flavour in many indian dishes.

Garam masala is best when added at the end of cooking and can even be sprinkled on a dish when serving. This mix can then be used in curries, lentils, soups or just sprinkled in some scrambled eggs.

The compounds found in spices like cloves, cinnamon and cardamom have properties that can reduce and regulate the cholesterol levels in the body. Due to its anti-inflammatory properties, garam masala can relieve heart burn and other inflammation issues. Spices like cloves have the ability to cure inflammation.

Garam Masala Oleoresin having some of the ingredients like pepper, cloves, cinnamon and cardamom are known to lower bad cholesterol levels. Cinnamon is great for people with type-2 diabetes as it lowers sugar levels. Cloves are also great antioxidants and have calcium, vitamins, and omega 6 fatty acids.