Oleoresins are true essence of spices with handling convenience.

Oleoresin from the Delicious Spice.
Extracts of Cinnamomum verum for Cinnamaldehyde & essential oil 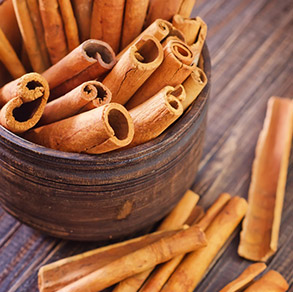 Cinnamon Oleoresin is a light yellow to red brown color liquid extract from the delicious & strongly aromatic spice with pleasantly sweet, warm & bitterish flavor, and contains volatile oil & fixed oil resins. The powerful spice is well used medicinally from thousands of years and continues still in time. One of the most expensive & highly treasured spice in past centuries, it has numerous tales of ancient time associated with it and exploration quests of Vasco da Gama & Columbus for its search. Cinnamon contains polyphenolic polymers and is in fact reported by researchers to be the best ingredient offering the highest antioxidant protective properties.

The main components in Cinnamon are the terpenoids i.e Cinnamaldehyde & eugenol, which are not only responsible for imparting the strong flavor but also strong anti-fungal & anti-allergenic properties. The other components,  basis the extraction varying from different parts of Cinnamon, can includes trans-cinnamaldehyde, procyanidins (α, β), catechins, cinnamyl acetate, L-borneol, caryophyllene oxide, b-caryophyllene, L-bornyl acetate, nerolidol, cubebene, terpineol, terpinolene, Bergamotene, Copaene. The sweet taste of cinnamon is due to the presence of cinnamaldehyde.

It is an excellent natural preservative agent.

It helps in improvement of blood circulation due to its blood thinning properties.

In bakery items, in personal care products such as soaps, coloring masks, cosmetics