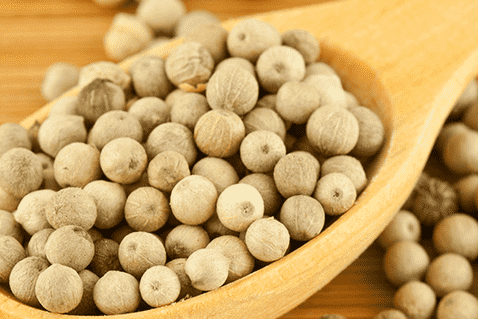 Piper Nigrum is a biological source of White Pepper.

White pepper oleoresin derived from dry seed in the family Piperaceae, cultivated for its fruit, known as a peppercorn, much of the world's white pepper comes from Indonesia. Specifically, it comes from an island to the south east of Sumatra called Bangka. Brazil is the next most important producer, but its white pepper is mild in comparison to the Indonesian variety. The White Pepper oleoresin is obtained by extracting its dried seed through the process of Super Critical Fluid Extraction green technology method. White pepper oleoresin has a hot taste on the tongue, pungent aroma and flavour of white pepper.

White pepper oleoresin contains a chemical called piperine. This chemical seems to have many effects in the body. It seems to reduce pain, improve breathing, and reduce inflammation. Piperine also seems to improve brain function.

Ozone Naturals are blessed with a green extraction, production method that is SCFE, large storage facility that helps us in keeping large stock and meeting urgent and massive requirements of the customers. With us, clients can stay assured for the quality of the products as we make use of the first class raw material that is, tested by well equipped quality control laboratory with experienced & knowable analyst on several measures prior to product manufacturing. Ozone Naturals offer world class quality White Pepper Oleoresin as per customer demand.

The White Pepper oleoresin is composed of various chemical constituents and includes the following; piperine, caryophyllene, sabinene, limonene and b-bisabolene.

Therapeutic : White pepper oleoresin is beneficial for muscular aches and pains, osteoporosis, and sprains. It can be helpful for rheumatism as well as rheumatoid arthritis. White pepper can stimulate the circulatory system to function more appropriately.