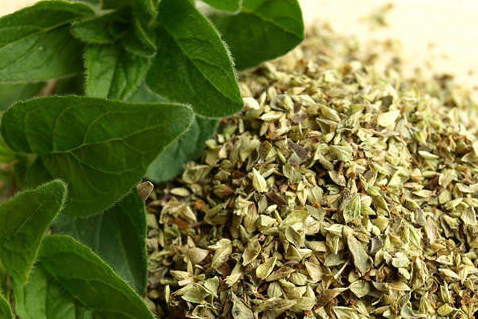 Oleoresin from the Oregano known as Origanum vulgare.

Oregano Oleoresin derived from Origanum vulgare is a flowering plant in the mint family (Lamiaceae). It is native to temperate Western and Southwestern Eurasia and the Mediterranean region. Oregano is related to the herb marjoram, sometimes being referred to as wild marjoram. Oregano has purple flowers and spade-shaped, olive-green leaves. Although oregano is heavily associated with Italian cuisine. It is likely that it originated in Greece. The word oregano comes from the Greek, meaning “joy of the mountain.”The oleoresin is obtained by extracting its dried leaves through the process of Super Critical Fluid Extraction green technology method. This oregano oleoresin has a light yellow to yellow brown colour semi-liquid and it has an aromatic, warm, and slightly bitter taste consists of various components namely carvacrol, p-cymene and linalool in oregano oleoresin as major compounds and also, as carvacrol, o-cymene, linalool, caryophyllene oxide and γ-terpinene in savory oil as major compounds. Presence of such chemicals makes Oregano oleoresin best for medicinal and culinary uses. It is used to the skin for skin conditions including acne, athlete's foot, oily skin, dandruff, canker sores, warts, ringworm, rosacea, and psoriasis; as well as for insect and spider bites, gum disease, toothaches, muscle pain, and varicose veins. Oregano oleoresin is also used topically as an insect repellent.

Oleoresin of oregano are widely recognized for their antimicrobial activity, as well as their antiviral and antifungal properties. Nevertheless, recent investigations have demonstrated that these compounds are also potent antioxidant, anti-inflammatory, antidiabetic and cancer suppressor agents.

Ozone Naturals are blessed with a green extraction, production method that is SCFE, large storage facility that helps us in keeping large stock and meeting urgent and massive requirements of the customers. With us, clients can stay assured for the quality of the products as we make use of the first class raw material that is, tested by well equipped quality control laboratory with experienced & knowable analyst on several measures prior to product manufacturing. Ozone Naturals offer world class quality Oregano Oleoresin as per customer demand.

Oregano Oleoresin are widely recognized for their antimicrobial activity, as well as their antiviral and antifungal properties. Nevertheless, recent investigations have demonstrated that these compounds are also potent antioxidant, anti-inflammatory, antidiabetic and cancer suppressor agents.

Therapeutic : Oregano Oleoresin can improve skin conditions such as psoriasis, acne, eczema, and fungal infections, as it eliminates yeast, bacteria, and fungi. Its anti-inflammatory properties can neutralize the pain, itchiness, and general discomforts of insect stings and bites.