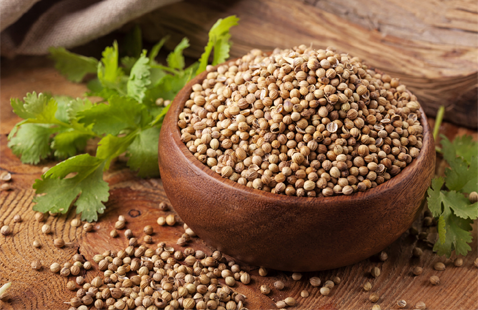 Oleoresin from the Coriander Plant is known as Coriandrum sativum.

Coriander oleoresin derived from extracts of Coriandrum sativum. Coriander is an annual herb in the family Apiaceae. It is also known as Chinese parsley, and in North America the stems and leaves are usually called cilantro. All parts of the plant are edible, but the fresh leaves and the dried seeds are the parts most traditionally used in cooking. The oleoresin is obtained by extracting its dried seed through the process of Super Critical Fluid Extraction green technology method. Oleoresin of coriander is light olive green to dark olive green semi-solid. Coriander oleoresin is a strong aromatic spice with a sweet aroma and a slightly bitter and pungent taste consists of various components namely linalool, α-pinene, camphor, γ-terpinene, D-limonene and geranyl acetate.

Coriander oleoresin used in the manufacture of perfumes, cosmetics and dentifrices. It is digestive, antispasmodic, anti-rheumatic.

Coriander oleoresin is used for digestion problems including upset stomach, loss of appetite, hernia, nausea, diarrhea, bowel spasms, and intestinal gas. It is also used to treat measles, hemorrhoids, toothaches, worms, and joint pain, as well as infections caused by bacteria and fungus.

Ozone Naturals are blessed with a green extraction, production method that is SCFE, large storage facility that helps us in keeping large stock and meeting urgent and massive requirements of the customers. With us, clients can stay assured for the quality of the products as we make use of the first class raw material that is, tested by well equipped quality control laboratory with experienced & knowable analyst on several measures prior to product manufacturing. Ozone Naturals offer world class quality coriander oleoresin as per customer demand.

Aromatic Agent : Coriander Oleoresin are used as an aromatic, carminative, stomachic, antispasmodic and against gastrointestinal complains such as dyspepsia, flatulance and gastralgia. It is often recomanded for insomnia and anxiety.