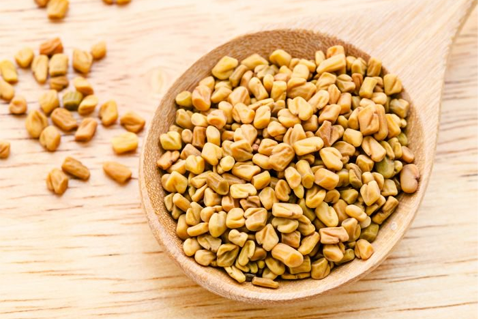 Oleoresin from the Fenugreek Plant is known as Trigonella foenum-graecum.

Fenugreek oleoresin derived from extracts of Trigonella foenum-graecum. Fenugreek is an annual plant in the family Fabaceae. It is cultivated worldwide as a semiarid crop. Its seeds are common ingredients in dishes from the Indian subcontinent. The plant originated in India and Northern Africa. Its seeds are used to prepare extracts for medical use. The oleoresin is obtained by extracting its dried seed through the process of Super Critical Fluid Extraction green technology method. Oleoresin of fenugreek is light yellow to reddish brown semi-solid with characteristic odour & bitter in taste consists of various components namely b-pinene, 2,5-dimethylpyrazine, 6-methyl-5-hep- ten-2-one, camphor, 3-octen-2-one, b-caryophyllene, neryl acetate, a-selinene and geranial.

Fenugreek oleoresin is taken by mouth for digestive problems such as loss of appetite, upset stomach, constipation, inflammation of the stomach (gastritis). Fenugreek oleoresin is also used for diabetes, painful menstruation, menopause, polycystic ovary syndrome, arthritis, poor thyroid function, and obesity. It is also used for conditions that affect heart health such as "hardening of the arteries" (atherosclerosis) and for high blood levels of certain fats including cholesterol and triglycerides.

Ozone Naturals are blessed with a green extraction, production method that is SCFE, large storage facility that helps us in keeping large stock and meeting urgent and massive requirements of the customers. With us, clients can stay assured for the quality of the products as we make use of the first class raw material that is, tested by well equipped quality control laboratory with experienced & knowable analyst on several measures prior to product manufacturing. Ozone Naturals offer world class quality Fenugreek oleoresin as per customer demand.

Aromatic Agent : Fenugreek Oleoresin is the most known aromatic liquid used in aromatherapy, Pharmaceutical, medicine, Flavouring agent in food products & Ayurveda formulation for treatment of dry skin, boils, hair loss and so forth.

Nutritional : It is known for its medicinal qualities such as antidiabetic, anticarcinogenic, hypocholesterolemic, antioxidant, and immunological activities. it is also used as a part of various food product developments as food stabilizer, adhesive, and emulsifying agent. More importantly it is used for the development of healthy and nutritious extruded and bakery product.