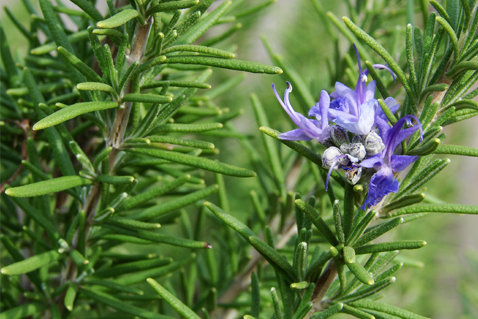 Oleoresin from the Rosemary known as Rosmarinus officinalis.

Rosemary Oleoresin derived from Rosmarinus officinalis. Rosemary (botanical name Rosmarinus officinalis), also known as Garden Rosemary, is native to the Mediterranean area. A member of the mint family, it is an evergreen shrub also related to basil, marjoram, and oregano. It is usually found growing by the ocean, and its latin name equates to "dew of the sea. The oleoresin is obtained by extracting its dried leaves through the process of Super Critical Fluid Extraction green technology method. This rosemary oleoresin has a greenish yellow to dark greenish brown colour semi-solid and is richly aromatic with a savory taste consists of various components namely a-pinene, borneol, b-pinene, camphor, bornyl acetate, camphene, 1,8-cineole and limonene. Presence of such chemicals makes Rosemary oleoresin best for medicinal and culinary uses. It is used to stimulate hair growth, reduce pain, soothe inflammation, eliminate headaches, strengthen the immune system, and condition hair to make it look and feel healthy.

It is also used as anti-stress, cognition-enhancement, psycho-stimulant, stimulant, decongestant.

Ozone Naturals are blessed with a green extraction, production method that is SCFE, large storage facility that helps us in keeping large stock and meeting urgent and massive requirements of the customers. With us, clients can stay assured for the quality of the products as we make use of the first class raw material that is, tested by well equipped quality control laboratory with experienced & knowable analyst on several measures prior to product manufacturing. Ozone Naturals offer world class quality Rosemary Oleoresin as per customer demand.

Nutritional : Rosemary Oleoresin have been used for their characteristic aroma in food cooking or consumed in small amount as herbal tea, while rosemary extracts are routinely employed as natural antioxidant to improve the shelf life of perishable foods.