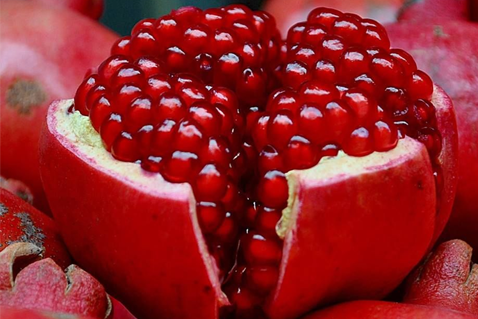 Punica granatum is a biological source of Pomegranate.

Pomegranate oil derived from fruit-bearing deciduous shrub in the family Lythraceae, subfamily Punicoideae, the fruit is typically in season in the Northern Hemisphere from September to February, and in the Southern Hemisphere from March to May. The pomegranate is native from Iran to the Himalayas in northern India and was cultivated and naturalized over the whole Mediterranean region since ancient times. It is widely cultivated throughout India and the drier parts of southeast Asia, Malaya, the East Indies and tropical Africa. The Pomegranate oil is obtained by extracting its dried seed through the process of Super Critical Fluid Extraction green technology method. It has a slightly sweet, sweaty flavour. The obtained light yellow to golden yellow liquid consists of various components namely Punicic Acid, Oleic Acid, Linoleic Acid, Palmitic Acid, Stearic Acid, Phytosterols, and Tocopherol (Vitamin E).

Presence of such chemicals makes Pomegranate oil best for medicinal and culinary uses. Pomegranate oil used in Ayurveda to reduce excessive thirst and burning sensation in the throat and GI tract. Pomegranate has a strong impact on our cardiac health such as atherosclerosis, blood pressure (lowers BP), reduces artery clogging plaque, and reduces cholesterol.

Pomegranate oil regenerates and repairs skin, and effectively reduces and prevents wrinkles in the epidermis. It has antimicrobial properties, healing and nourishing qualities. It is an effective anti-inflammatory agent. It has superior moisturizing ability, nourishing and softening skin.

Ozone Naturals are blessed with a green extraction, production method that is Co2 SCFE, large storage facility that helps us in keeping large stock and meeting urgent and massive requirements of the customers. With us, clients can stay assured for the quality of the products as we make use of the first class raw material that is, tested by well equipped quality control laboratory with experienced & knowable analyst on several measures prior to product manufacturing. Ozone Naturals offer world class quality Pomegranate Oil as per customer demand.

Pomegranate Oil is an all-rounder with varied benefits serving in medicine, pharmaceutical and flavouring agent in food industry.

Therapeutic : The therapeutic properties of Pomegranate oil that can reduce inflammatory activity in the digestive tract, as well as in breast cancer and colon cancer cells.

Nutritional : It is known for its medicinal qualities such as the high amount of punicic acid and PNG in pomegranate oil provides many beneficial biological effects such as anti-inflammatory, antioxidant, anti-apoptotic, anticancer. it’s used in formulation of pharmaceutical, neutraciuticals, food & beverage industry.